The hazy images of the first people on the moon were barely sharper than the visual blurs that a television set produced on normal nights. But the knowledge that my father and I were looking directly at this giant leap in the human evolution made an overwhelming impression on me on July 20th, 1969. Fifty years later, my respect for this combination of human ingenuity and this ultimate example of the power of cooperation has even grown. You need a lot of courage to step aboard of a hundred meters high smoking explosive, filled with thousands liters of kerosene, liquid oxygen and hydrogen.

Twice I went to an IMAX theater to immerse myself in this fascinating adventure once again. Going to the cinema for a space film is usually a tricky undertaking. Hollywood films often tend to be sentimental, patriotic and they opt for easy tension rather than serious truth-finding. If the failed Apollo 13 had been such a typical American tearjerker, how easy was it to use the heroic Apollo 11 flight for the wrong reasons? In my mind I heard plasticized performances of dramatic Wagner operas and I saw ideal American families looking up at the Stars and Stripes with tearful eyes.

I had heard that the American flag would not be planted in the film, which was a good sign. The flag was blown over during the ascent of the moon lander for that matter. The space race between Russia and America may have been the direct reason for these lunar journeys, the film First Man is far from being political. It is the story of Neil Armstrong, who was selected for this task because of his cold-bloodedness. The choice for Armstrong was a lucky one, this became evident when he had to dodge an unexpectedly emerging rock the size of a large Volkswagen just before touching the moon, with hardly enough fuel on board to be able to take off again later.

Armstrong rarely allowed others to look into his soul. He avoided interviews and social obligations as much as possible. During the Apollo 11 mission, the chance of a fatal accident was fifty percent. Armstrong could handle this tension, but for his family this was far more complicated. Thanks to Claire Foy’s  phenomenal acting performance, we can feel what it must have been like for those who stayed on earth. Foy puts down an impressive Jan Armstrong who shows compassion and who comforts fellow astronaut’s wives after the entire crew of the Apollo 1 had been burned in an oxygen-filled test capsule during their training. And she is very clear towards Neil: “I want you to tell the children that the chance that they will see you again is fifty percent.” Neil and Jan Armstong had lost their daughter to cancer at a young age. First Man makes the stoical astronaut who kept his emotional life private a real human being. 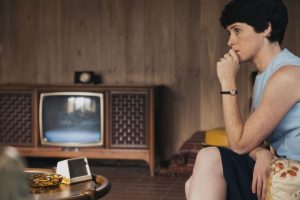 Apollo 11, my second IMAX adventure, is a documentary. Space documentaries often suffer from the National Geographic effect: a lot of noise, few facts, talking heads who tell you what you have just seen and unnecessary swelling music. Apollo 11 sticks to the adagium: “show, don’t tell”. The American National Archives contains hundreds of film roles and around 11,000 hours of audio material. It is therefore not very difficult to bring out beautiful images, but the challenge is to make the right selection and to assemble it effectively. Director Todd Douglas Miller starts the 91-minute documentary with a shot of the one hundred-meter-high Saturn rocket that is slowly driven from the hangar on top of a caterpillar vehicle on its way to the launch base. We see the digitized images in a large format so that the proportions of this adventure make a deep impression on the audience. Not only travelling with a rocket is risky, you need nerves of steel to only get into the elevator that takes you to the cramped capsule that you have to share with two others.

Then the documentary shoots back and forth between extremes: Neil Armstrong, Buzz Aldrin and Michael Collins (who did not descend to the moon but stayed in the capsule, where he enjoyed some more legroom for several hours) are helped in their suits. The camera comes close to their tense faces. When we zoom in on Armstrong, we can see by the nervous blinking of his eyes that he is a human being like us. In the meantime, a crowd of a million day trippers is gathering outside, watching the events from a safe distance. It is as if we have travelled back in time and can join in a pleasant picnic of Americans, armed with binoculars, all in the mood for a good time. The next shot of the many NASA employees who play a role in the background is very effective as well. Seated behind their antique screens, hundreds of specialists were working on this monster task. Armstrong, Aldrin and Collins were the actors in a play in which many others contributed as well.

The final moon landing and the first footsteps speak for themselves. Much more extensive than on television at the time, we see the take-off from the moon and the rendezvous with the mother ship still orbiting the moon. Even more than then, I am impressed by this wonderful combination of human effort and the fragile but reliable balance of the gravities of both moon and earth. And I haven’t even mentioned the wonderful shot in which our beautiful blue planet suddenly appears.

First Man and Apollo 11 bring the human dream that came true to life.