Eli Degibri named the title of his ninth album after his parents. The Israeli composer, saxophonist and bandleader portrays on Henri and Rachel his demented mother, his deceased father and his wife Noa. Degibri wrote beautiful new melodies in well-crafted arrangements. Thanks to his tightly playing accompanists they sound exciting. The other musicans are pianist Tom Oren, bassist Alon Near and drummer Eviatar Slivnik. Degibri studied in New York and played there among others with Herbie Hancock and Al Foster. 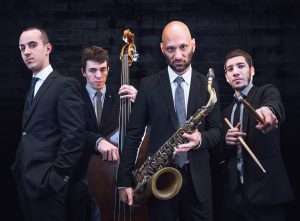 In 2011, he returned to Tel Aviv to be closer to his parents. Various influences can be heard in his music: Eastern European folk music, modern jazz, black gospel,  blues and Bach preludes. Although Degibri seems to have a preference for unusual time signatures, his music remains accessible. The love for his family permeates this new album in a moving way. Even without this prior knowledge, Degibri’s musical structure stands firmly like a house with many rooms on a solid foundation.