Eva Cassidy Behind the Rainbow

It is April 2, 1978, and while owner Jack lights the hearth fire and bartender Brian rinses the glasses, three musicians enter the Fleet Reserve Club through the back entrance. The attractive club in the historic town of Annapolis in Chesapeake Bay, Maryland, is usually the preserve of navy personnel during the evening hours. ‘Whatever happens Dan, don’t show your ignorance,’ Eva carefully reminds her brother. Usually he chuckles at their favourite quote from TV series The Rascals, but tonight they are both too tense to laugh. Hugh walks like a man in charge, acting as though the Fleet Reserve is his natural habitat. He had decided the time is right to present his musical children to an audience of strangers.

Hugh has had trouble finding a parking lot near to the club, so the trio are a bit late. The first guests can arrive any moment. When Hugh takes off his coat the enormous bundle of muscles under his Hawaiian shirt attracts attention. Eva asks Dan if he can stand between her and her father on the flat stage. Hugh positions the house microphones, shifts the monitor loudspeakers a bit and moves a bar stool so that he can sit while playing. Dan tunes his violin at the same time. Eva looks a bit lost in this unfamiliar space and she stares at the ground. ‘Put on your dress,’ commands Hugh, who notices his daughter daydreaming. ‘Ask Jack where you can find the dressing room.’

They have practiced at home for years; they know the ‘American songbook’ practically by heart. They begin a warm-up. Eva, who has the best voice, takes lead vocals. Dan and Hugh pluck a second and a third part out of the air. With the same ease Dan conjures up attractive counter-melodies from his violin. Hugh is convinced that his teenage children will create a stir among the audience. Later that evening accordion player Joe and his pregnant wife will join them in a few songs. Dan and especially Eva would have preferred to stay at home but Hugh is unrelenting: ‘Don’t bury your talents in the ground and don’t hide your light under a bushel.’

While they wait to start the show, Dan and Eva quietly sit at the bar, each with a glass of Pepsi. They study the pictures of famous predecessors hanging from the walls, not least the celebrated Virginian jazz guitarist Charlie Byrd and his brother Joe. When Jack gives Hugh a signal he urges his children to get up and take their positions on the small stage. Eva is the last to leave the bar, as Hugh planned, yet her face betrays her nerves. Someone shouts through the loudspeakers: ‘A big hand for the Cassidy family,’ but Eva isn’t able to see where the voice comes from. She tries to loosen her guitar, tuned by Hugh, from its stand, but she realises that the strap is stuck. Eva’s black dress takes away much of her freedom of movement, yet she knows there is no alternative but to squat down and try to release the strap. ‘Use your vibrato,’ Hugh whispers piercingly from behind his electric bass guitar. But Eva is more concerned with the ungraceful position she has assumed. With all the power in her short arms, she succeeds in dislodging the strap so that she is finally able to hang the Harmony guitar with the nylon strings round her neck. She can’t postpone the confrontation with her audience any longer. When she turns around she stands transfixed as the microphone and stand drop to the wooden floor with a loud bang, causing a painful and penetrating screech of reverb. 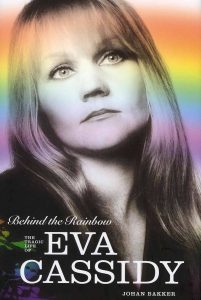 or at your local bookstore.