In my hometown, the Eurovision Song Contest has become an unavoidable event. Houses and squares in the centre of Rotterdam have been decorated with colourful song texts from ‘Hallelujah’ to ‘Loving You is a Losing Game’.

Curious about the atmosphere in the Southern part of the city, I cycle through the newly restored Maastunnel.  Charlois does not yet welcome me in a festive way, but around Zuidplein something of the Eurovision feeling can be sensed.

From a great distance, I see Jeangu Macrooy’s portrait that artist Tymon de Laat painted on a high wall. On Saturday evening, Macrooy will sing a few lines in Sranantongo, a language often used in Surinam: ‘Yo no man broko mi’ (You can’t break me). His statement is more important than the question whether he will win. 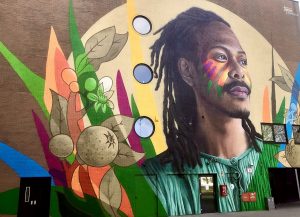 Next to Ahoy, a test street has been set up, where the festival participants have to report regularly. A pedestrian traffic light tries to make the wait more pleasant with a tinny version of ‘Waterloo’, the song that made Abba history in 1974. The line ‘Couldn’t escape if I wanted to’ haunts me for the rest of the day.

The surroundings of Zuidplein have been undergoing radical changes. The old Zuidplein theatre has been demolished to make way for a modern cultural centre. Next to the theatre is an interactive art pool inspired by David Hockney’s ‘A Bigger Splash’. 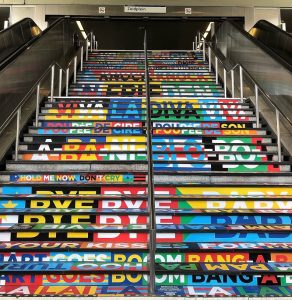 On the south side of the bus and metro station, I walk into a pedestrian trap. The railings are emblazoned with song titles such as ‘Rise Like A Phoenix’. Suddenly, my eye is drawn to a colourful three-dimensional work of art. It is signed by Herman Brood, who died 20 years ago. This must be a forgery,’ is my first thought. A work of art like that shouldn’t be outside unprotected. Closer up, however, the colourful object cast in concrete seems remarkably authentic. Why haven’t I noticed this before?

On a closer inspection, the pavement on which I am standing turns out to be a real Walk of Fame. I look in amazement at the handprints of the four members of Golden Earring, Johan Cruijff, André van Duin, Tina Turner, Johnny Cash and Cliff Richard. Dick Bruna has even immortalised an original Miffy in the concrete. The tile in which Boudewijn de Groot describes himself as “De Eenzame Fietser” (The Lonely Cyclist) has, like a few others, been damaged by the elements. My surprise turns to indignation when I see how indifferent metro and bus passengers, engrossed in their phones, walk over the celebrities.

I am joined by a man equipped with a bucket and brush who is cleaning the tiles.

“What a shame that people walk all over this area,” I say, “that can’t be good for the handprints, can it?”

“You don’t need to tell me,” the man replies, ‘This is clearly not the right place for these tiles.”

He puts down his bucket and introduces himself as Emile Hilgers, board member of the foundation that is responsible this piece of cultural heritage. “In 2013 we moved from Schiedamsedijk, where it had been a popular attraction, to Zuidplein because Rotterdam wanted to give this area more status. The municipality financed the relocation plus a coating to give the tiles a uniform appearance.”

That Lee Towers had to sing ‘You’ll Never Walk Alone’ in the pouring rain at the reopening in 2013 was an unfavourable omen. Both the move and the ineffective protective coating can be considered failures in retrospect. What to do next?

“We can’t stay here,” says Hilgers. “The tiles do not fit into the newly laid pavement because  of their size. We are looking for a new location, preferably in the city centre.”

“You should invite contemporary celebrities for their handprints,” I suggest.

“Dirk Kuyt made a new stone not long ago, including his name and number. We have other famous people in mind, but given the uncertain situation we are holding our breath. Hilgers points to a banner that he has had placed, with an appeal to contribute to the necessary move.”

“Lee Towers has already promised to sponsor a new version of his tile. I hope others will follow his example. We are also looking for entrepreneurs, cultural funds and private individuals who believe in this attraction.”

“And the municipality of Rotterdam?”

“They had already given money when the Walk of Fame moved to the South. Then the responsibility for maintenance and continuation was transferred to our foundation.”

“In Hollywood, the popularity of the Walk of Fame is undiminished,” I say.

“Artists even pay for a spot on Hollywood Star Boulevard. Those stones are also much easier to replace, they don’t use handprints. They’re tiles with a star and a name, that’s all.”

The handprints do indeed make this ‘star pavement’ unique. Especially if the celebrities had their creative fling on the material, like boxer Bep van Klaveren who punched his fist forcefully into the wet concrete.

Realising that there is still much to discover in the city where I have lived for twenty-six years, I cycle back. In the centre of Rotterdam, I see many beautiful places that would give the Walk of Fame the status it deserves.

The Walk Of Fame Europe was set up in 1990 as a cultural attraction in the city of Rotterdam. Volunteers placed 150 concrete tiles with handprints of national and international sports and music heroes on Schiedamsedijk (between Coolsingel and Erasmus Bridge). In 2013, 60 tiles were moved to the Zuidplein square, over 30 others found an alternative use and the rest are in storage. The tile of dressage champion Anky van Grunsven (including the hoofprint of her horse Bonfire) can be seen at the Rotterdamse Manege in Kralingen. The hands of Olympic swimming champion Rie Mastenbroek were placed on the walkway to the 50-metre pool named after her at Zuidplein. The tile of sprinter Arie van Vliet was placed by the statue ‘The Cyclists’ in Woerden. The handprints of Fleetwood Mac, Lionel Richie and Monique van de Ven, among others, were sold to fans.

The foundation must find a new destination for the Walk of Fame before 1 November. The protective layer of the stones is wearing off. Donations are welcome. More information: walkoffame.nl